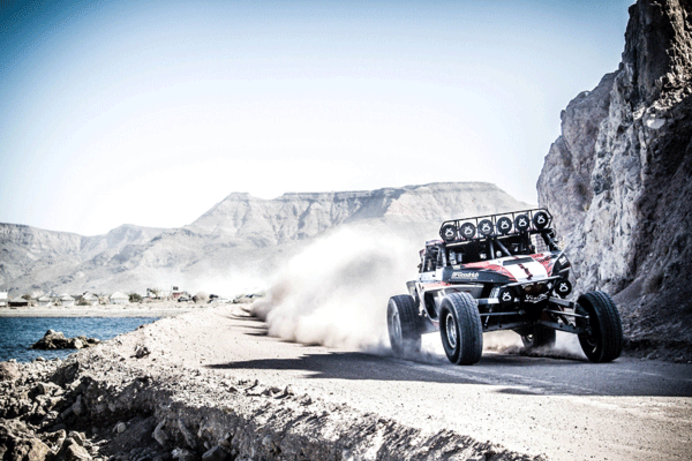 Some call it a sport, others a hobby...

For us, and I am sure that those who have experienced the adrenaline of any kind of racing, something that has the power to absolve anything but the few hundred yards right in front of you, from the depths of your mind, is a feeling that is hard to beat.
Combine that with the sheer beauty of the Baja Desert, and the adrenaline of never knowing what happens next, of two corners never being the same, nor the same corner being the same on two different days, and all of a sudden, you take this feeling to a whole other level!

A world that fills you with unforgettable scenes & moments, and surrounds you with great people and excitement...
Although originally drawn to Baja because of its unique Sea of Cortez, Andrea quickly became enticed by the locals love for off-road racing. That love led to Andrea owning his first race car in 1996, a Class 9 Buggy, after which he moved up to Class 7, driving for the TECATE Off Road Racing Team. Andrea later moved up to, first Class 6 with a FORD Explorer, where Andrea won his first Baja Championship, after which he switched to Full Size pick-ups (Class 8 Open), in which he accumulated 5 consecutive Championships. Andrea has had the opportunity to drive for various other teams since 2012, as which he was proud to be part of a SCORE Baja 1000 Class win in Class 5 Open for Tanom Racing, a SCORE Baja 1000 Trophy Spec Second Place and a finishing effort, driving over 600 miles in Trophy Truck in the grueling 2017 50th Anniversary Baja 1000.

Andrea fell in love with the simple beauty of the Baja Peninsula and its surprising variety of land, terrain and mesmerizing hot spots, but more so for the local people, whom keep surprising you with their generosity and kindness, especially the further you get away from the paved roads. He has found a rich quality of life getting to know Baja both on and under the water, as in the desert for over the last two decades and is proud to call many of the ranchers as friends.

​Wanna Race?
We can make it happen. Rent a truck and full race support from us.
Wanna to keep your race truck in Baja and race in the capital of Off Road Racing?
We can take care of all logistics, race preparations and pits.
Wanna see what all the fuss is about?
Come and join our crew for a race and check out how Off Road racing is Baja’s national sport and passion!

Come and join us in the dirt!